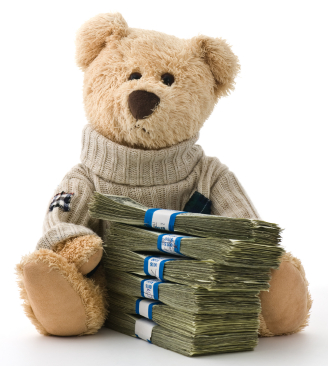 Beanie Baby creator, Ty Warner has agreed to plead guilty to hiding more than $93 million in a secret United Bank of Switzerland (UBS) account. According to the charges, the money was hidden between 1996 and 2002 - the years of the Beanie Baby craze!

In 2002 he transferred the money in the UBS account to a second account at another bank in Switzerland. Money in those accounts earned him $3.1 million in investment income, on which he should have paid US tax of $1.2 million. More than a decade later his secret accounts were uncovered because of a probe of foreign banks.

Warner has agreed to pay a civil penalty of $53.5 million for failure to file a Foreign Bank Account Report (FBAR). He is also facing a tax evasion charge which could earn him five years in prison, back taxes, and a maximum fine of an additional $250,000. Can't say I feel sorry for him as he has a reported net worth of 2.6 billion!

What is FBAR?
A Report of Foreign Bank and Financial Accounts (FBAR) must be filed by any US persons having financial interest or signature authority or other authority over any financial account in a foreign country if combined value of foreign accounts exceeds $10,000 at any time during the calendar year. The FBAR report is due annually on June 30th and there are no extensions offered.

FBAR Penalties
As you can see, the penalties associated with undeclared foreign income can be steep if you fail to report foreign income. Civil penalties for not filing an FBAR can vary from $10,000 per month for filing late to 50% of the highest aggregate bank balance (all account balances combined) - this is where Ty Warner's $53.5 million civil penalty came from.

Criminal penalties can cost a lot more than money, including a fine of $250,000 and 5 years in prison. But, if an FBAR violation occurred while violating another law the penalties are increased to $500,000 in fines and up to 10 years in federal prison.

The Swiss Bank Helped the IRS
Warner went to great lengths to keep the accounts secret from his accountants and the IRS. However, in 2009, the IRS and UBS reached an agreement where in exchange for information on secret accounts held in the bank, the IRS would bring less severe charges against the bank. Under this agreement, UBS avoided prosecution by paying $780 million, admitting it aided US tax evasion and handed over data on 4,500 accounts. Since the deal was struck, other banks from Switzerland, India, Israel, and Barbados, have also joined the agreement.

FBAR Amnesty
Starting in 2009, the IRS offered the Offshore Voluntary Disclosure Program allowing people with undisclosed income in foreign accounts to come forward and get current with the IRS. Ty Warner tried to avoid prosecution and come forward under this amnesty program but was denied because he was already under investigation. To date, more than 38,000 people have come forward and the IRS has collected over $5.5 billion. The IRS is no longer offering amnesty.

More Penalties Associated with Undisclosed Income
You are expected to report any income you have earned and pay taxes on that income regardless if you receive a W-2 or 1099 for that income. If you fail to do so you could face many different civil or criminal penalties. As you can see with what happened to Ty Warner, the civil penalties can be quite substantial. There are at least 13 different civil penalties you could have to pay - from simply filing late up to fraud. Criminal prosecution and penalties come in when you willfully fail to file a return, keep accurate records, supply the information or pay any tax due.

Small Business Penalties to be Aware of...
Most small businesses don't have to worry about the big penalty Ty Warner is having to deal with since they don't have $100 million in offshore banks. But there are many penalties they unknowingly expose themselves to each year. Next week we will talk about one reporting requirement many small businesses ignore but the penalties could break a small business.